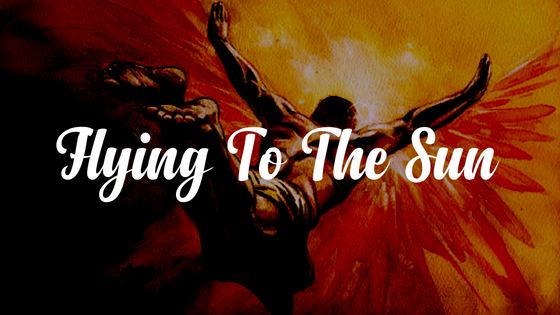 I gave a short 7 minutes speech just 2 days ago. It was titled “Fly To The Sun”. The feedback I received after the speech was that it was inspirational.

What was my message?

I happened to chance on a You Tube video by my favorite online hero, Seth Godin. He spoke about his book titled, ‘The Icarus Deception”. He briefly explained that we had grew up with only half of the myth being imprinted on our minds. And that is that of Icarus falling to the seas, because he did not heed his father’s advise of not flying too high up and close to the sun, as this will melt the was on his crafted wings.

The fact of the matter is, there was another cautionary message, stipulated by his father. One that we somehow conveniently forget. And that is, not too fly too low to the seas, as the water can wet the wings and make it heavy. In other words, fly too low, and you might also fall into the seas.

I found this aspect of the story interesting. Yet, as Seth mentioned, it is usually omitted out.

How often have we had people tell us not too have too high an aspiration? Or not to have too lofty a goal? Or day dream too much? Were we not deemed and mocked as the ultimate idealists, when we aspire too fly a bit higher?

We were insinuated with the idea that it is far better to just be realistic. To just fly high enough stay in the game. The danger,as they highlighted, is that when you fly too high, you might just get your wings burned to ashes, and you will dive right into the seas.

Yet, the problem for most of us is that, we had set a barometer of realism  to be so low, we are actually navigating too near to the seas, to begin with. It is in my opinion, that more people are susceptible to fall into the seas, due to the fact that they are burdened with their heavy wings, due to the low altitude. When you fly too low, you are bound to wet your wings.

The challenge for most of us, is to understand that  these days, there is an imperative need to aspire to try and fly to the sun. Yes, you might burn your wings and fall to ground. But the glory of flying high, soaring and just cruising when you know the right altitude is far more rewarding than gliding comfortably a few inches above the waters.

You should understand that nothing magnificent was ever achieved by being realistic.

If Martin Luther King was being realistic, his “I Have A Dream” speech will not be echoed till now.

If JKK was being realistic, no man would have landed on the moon.

If Walt Disney was being realistic, Mickey Mouse would have just been a doodle on a piece of paper.

Idealism is not dead. And it should not be. Cause being idealistic is the first building block towards your monuments of achievements..

Flying to the sun?