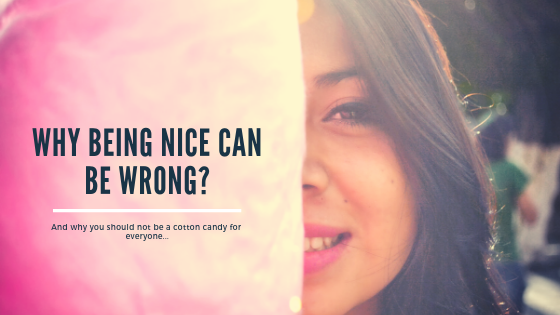 We’ve all gone through that brief period in our lives where we felt that we were taken for granted, mentally abused, seen as meek and non assertive and be the butt of jokes and sarcasms. Only because we were nice people. At least that is what we affirmed ourselves back then.

And the question is, are we still being perceived as that someone who is worthy of being trampled upon?

For the longest time, I’ve been at the brunt of being friend zoned by women I admired and adored. I never quite figured and understood why. I did everything and anything to “push” and “assert” my feelings. Yet, all these women still held onto the belief that I was “perfect” as a friend, buddy and confidante. Not as a potential partner. Thus I was being subjected to being described as, “not man enough”, “unsure”, “not focused”, “flimsy” and “needing directions”.

The most dreaded of it all? I was “too nice’.

I began analyzing the patterns of my failures and realized one distinct trait.

A friend came up to me and complained about her partner. As I did not want to be seen as imposing about my thoughts (I hated her partner too), I thought I was being nice by asking her, to forget about it. Citing that there will be a silver lining behind every storm. Since that instance, my friend never looked upon me as someone credible enough for comfort. Cause I tried to be nice at the wrong time. She needed me to be strong for her. I did not.

My brother and I had a fall out, because I thought that being nice to my parents instead was the way to go. We were planning for his wedding arrangements. Though I understood that my brother needed my support, I was under the impression that being nice and submitting to my parents requests pertaining to the wedding was more important. As a result, the wedding proceeded with my parents eventually caving in to my brother’s planning, while I became the “evil guy” in the family. Never quite recovered from the fall out, because I was being nice for the wrong reasons. I should have been there for my brother instead.

I protected my best friend’s interests once when he was caught out over a sordid affair, just months before his wedding. I held out, making sure that his reasoning stood firm and I will try to cushion or be blamed for “instigating” him. In the end, all that nice intentions were pointless, as even he unleashed the brunt of the affairs on me. We ceased communications after that. I was nice for the wrong person. He did not deserve it.

The 3 instances became landmarks for me. Cause I discovered that people form judgement about us, based on their experiences with us. More importantly, experiences that they will earmark as reference points. People have short memory banks. They just need one or two reference points to for the basis of your character or personality. You might have been nice and faltered in one way or another, and they would have taken that as, the classic example as to why, they can have a free rein with their thoughts about you.

So how can you go about it?

I will say, based on the 3 references above, start changing your landmarks.

“But I am a nice person generally,” you say.

Well, glad that you recognize and love that part about yourself. And just because we are cotton candies, should we let people take a bite out of us everytime? I don’t think so. 🙂